A skin irritation, commonly known as swimmers itch, may affect people, to varying degrees, after swimming in certain Michigan lakes. In an attempt to better understand and try to control swimmers itch, a partnership, the Michigan Swimmers Itch Partnership or MISIP, has been formed by many area lake associations, including Long Lake. MISIP is funded through the State of Michigan. MISIP funding is available to lake associations to help defray the cost of the assessment, prevention, and the control of swimmers itch on their respective lakes. Last year the Long Lake Association (LLA) with assistance from Long Lake Foundation hired a consulting firm, Freshwater Solutions (FWS), to conduct research on our behalf to better understand our specific situation. Freshwater Solutions has had decades of experience in researching and controlling swimmers itch.

Swimmers itch is developed in people when microscopic parasitic larvae burrow into human skin, causing a red, itchy rash. The larvae then quickly die, since humans are not suitable hosts. These larvae are known as schistosomes and have a complex relationship with its hosts. Different species of schistosomes are linked to certain bird or mammal hosts as well as specific snail species.

1) LLA contracted FWS to do an Assessment of Long/Mickey Lake in the summer of 2018. Samples were taken from 10 distributed sites for analysis of types of schistosomes and snails prevalent to those sites. Also, a physical count of the types and quantities of potential host birds was performed.

2) It appears mallard ducks maybe the bird host most typical to the Long Lake schistosomes. As mallard ducks are a designated game bird, there are limitations as to what we can do with them.

3) Greatest quantities of schistosomes occur during the morning hours and decrease throughout the day.

4) Concentrations of schistosomes diminish as you move into deeper water.

5) The Long Lake Association board has authorized additional sampling and testing this year in areas that new incidents of swimmers itch are reported. 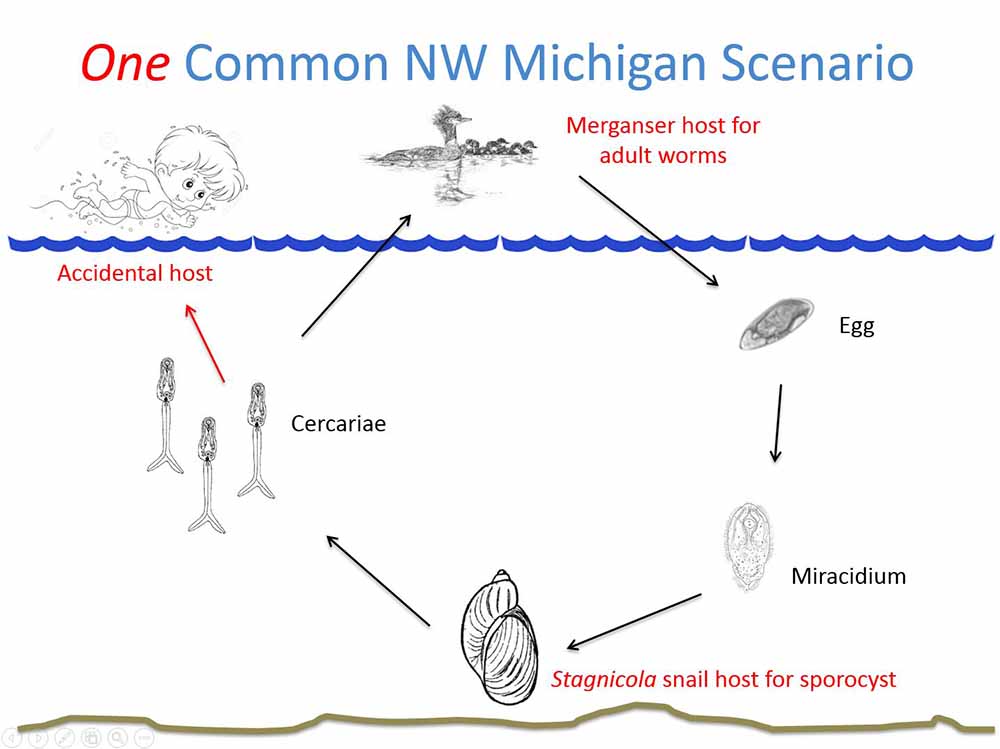 Many questions remain as to a comprehensive strategy that would completely eradicate swimmers itch from our lake. It is highly unlikely that it can ever be completely eliminated. The good news is solid research and analysis is allowing us to make better-informed decisions and to maintain the sterling quality of our most precious lake. The reported incidents of persons contracting swimmers itch appear to be decreasing, although this is somewhat anecdotal and not based on hard numbers. We will be collecting information again this year on the occurrence, location, and time of swimmers itch infections.

FWS/UA scientists were able to quantify the risk of contracting swimmer’s itch as a function of time-of-day (Rudko et al. 5, 2018). Since most of the itch-causing cercariae exit the snails in the morning and only live for a day, you would expect fewer cercariae to be around in the afternoon due to movement by wind, predation, natural mortality, etc. FWS/UA documented that riparians greatly reduce their risk of being exposed to virulent cercariae as the day progresses.

Results from work done in 2018 (Project ’18 Final Report6) show cercariae numbers increasing near shore with an onshore wind, with very high numbers found within 1 meter from shore. Very few cercariae were found in deeper water when samples were taken at regular intervals on a straight line transect from shore to deep water with either an offshore or onshore wind. Some find relief by traveling to and swimming in nearby waters where the parasites are absent or greatly diminished. Others find blow-up kiddie pools placed down by the water an acceptable alternative for infant to 3-year-olds.

Rash guards are tight-fitting one or two-piece swimsuits fashioned from combinations of polyester, nylon, lycra, or spandex for stretch, breathability, and quick-drying properties. They are relatively inexpensive and protect against most water-borne invaders, including the cercariae that cause swimmer’s itch. Rash guards remove the need for creams and/or sunscreen (except to face), which eliminates foreign chemicals being applied to skin or added to the water. Additionally, rash guards work against all species of parasites.

FWS/UA scientists innovated and conducted research on this prevention strategy in both 2017 and 2018. Results were very promising at multiple study sites and reduced risk by 90+ percent (Project ’17 and ’18 Final Reports6,7). Different configurations were tested and optimized. The biggest advantage is in creating a safer swim area for multiple riparians (such as a public beach or popular swimming beach). Improvements can be made to lower costs, improve appearance, and increase effectiveness if additional funds become available.

FWS/UA scientists created and conducted research on this prevention innovation in both 2017 and 2018 as well (Project ’17 and ’18 Final Reports6,7). Since cercariae are mostly shed from snails in the morning and travel to the surface for the rest of the day, most can be easily “skimmed” off the water surface before swimming, similar to skimming leaves from a pool. This technique can be employed alone or in conjunction with a swim baffle.

This technique has the potential to impact the largest number of riparians on a lake. Effectiveness data are conflicting, with a couple of Michigan lakes reporting some prevention success while others are abandoning this technique due to minimal, if any, improvement. This technique requires costly initial assessment to obtain a nuisance permit from the MDNR and costly brood removal each year. Some associations are questioning the ecological impacts of removing an entire population of top-tier predators from a lake ecosystem; more study needs to be done in this area. Positive results take at least a year before they are realized. Research conducted by FWS/UA scientists in 2019 shows spring and fall migrants play a significant role on some lakes, making this technique less effective (paper in progress). Recent research shows relocated mergansers travel great distances from their release sites and swimmer’s itch is now being reported in the Great Lakes near release sites. Additionally, some relocation sites show cercariae in the water (Relocation Site Analysis Final Report 20198), which brings into question the sustainability of this technique.

What we have accomplished so far

LLA invested roughly $13K in 2018 to perform an assessment and research on our lake.

Also, training was provided to allow for our own water sampling to test for new incidents of SI as they occur in 2019.

Samples are sent to a third party consultant for analysis of SI source.

We will continue to monitor occurrences of SI on our lake and take appropriate actions, within the scope of our LLA budget.

Please notify your Board if you or any family/friends contact SI while swimming in Long Lake. Notification can happen by calling Rick Dahlstrom at 248-568-4263.